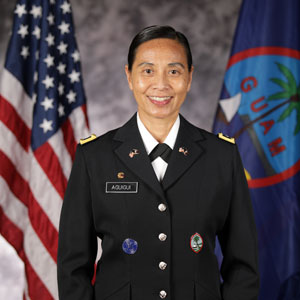 Major General (GU) Esther J. C. Aguigui is the Adjutant General of the Guam National Guard and the Director of Military Affairs. As the adjutant general she is the senior military advisor to the governor of Guam and commander of the Guam National Guard responsible for the training, readiness, management and combat effectiveness of approximately 1,600 Soldiers, Airmen and civilians.

Aguigui has over 30 years of distinguished military service. She entered the U.S. Air Force Reserve in 1985 as an Information Management Specialist in the 44th Aerial Port Squadron, Andersen AFB, Guam. In 1996, Aguigui transferred to the Guam Air National Guard and served as the First Sergeant of the 254th Civil Engineer Squadron. In 1999, Aguigui joined the Guam Army National Guard and served in various assignments to include Aide de Camp, commander of the 294th Military Intelligence Detachment, the Guam Army National Guard (GUARNG) Element, and the Recruiting and Retention Battalion. As the GUARNG commander, she was dual hatted as the Chief of the J1 Casualty Branch. In 2006, Aguigui served as Deputy, Senior Counterintelligence Officer for Joint Special Operations Task Force and the Liaison Officer to the Combined Joint Special Operations Task Force, Afghanistan.